You are here: Our Story > Beyers Truter

In terms of personality and character, Beyers Truter was – and still is – a force of nature. Add a love of the soil and the land, a curiosity for learning and truly natural winemaking skills, and you would be hard-pressed to think of anyone more suited to take over the keys to the cellar in 1980.

Beyers graduated from the University of Stellenbosch in 1979 with a degree in BSc Agriculture with oenology and viticulture, and initially worked for the Fruit Board as part of his bursary commitments. At 25 years of age he became Kanonkop’s third winemaker, and arrived at the farm ahead of the 1981 vintage.

Beyers began his own experiments with the winemaking practices on Kanonkop, particularly in the extraction of colour and tannins from the red grapes fermenting in the open concrete tanks.

He harvested each vineyard block separately, keeping the grapes apart in the 10-ton fermenters. After a bit of trial and error he found that manual punch-downs done every two hours – instead of every six to eight hours – produced optimum results for colour and tannin extraction. He also saw that shorter punch-down periods of 15 minutes per tank were giving the juice more character and greater complexity and depth.

The development of this practice, which is still part of the Kanonkop ethos to this day, was a highlight of his career on the farm. 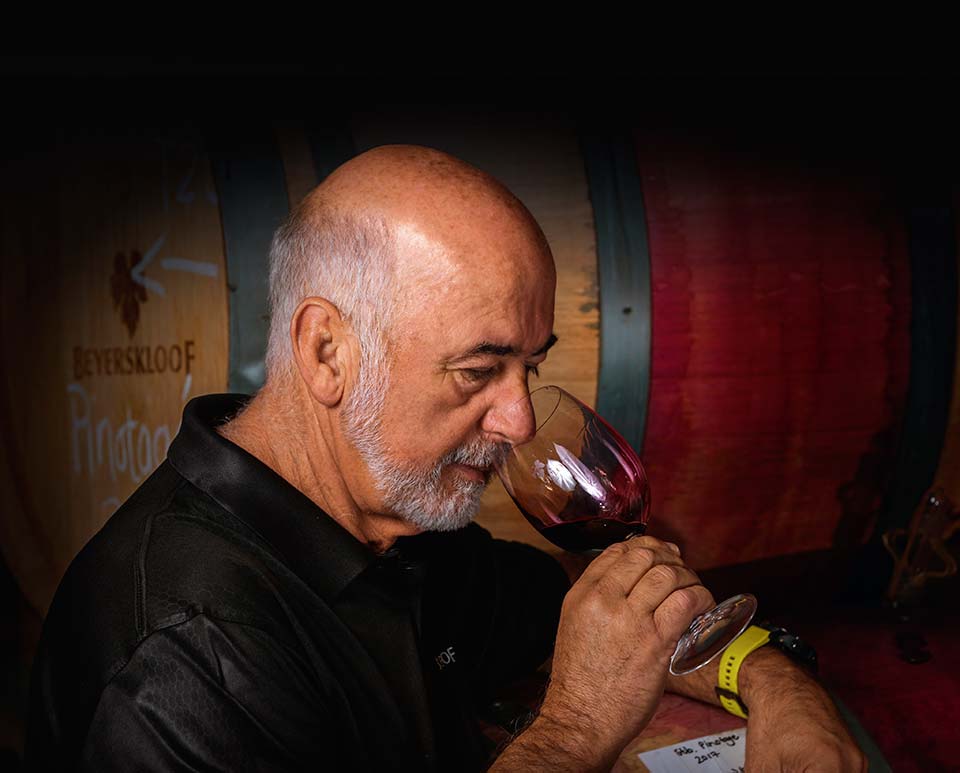 “I knew Pinotage could make great wine. It began to consume me” 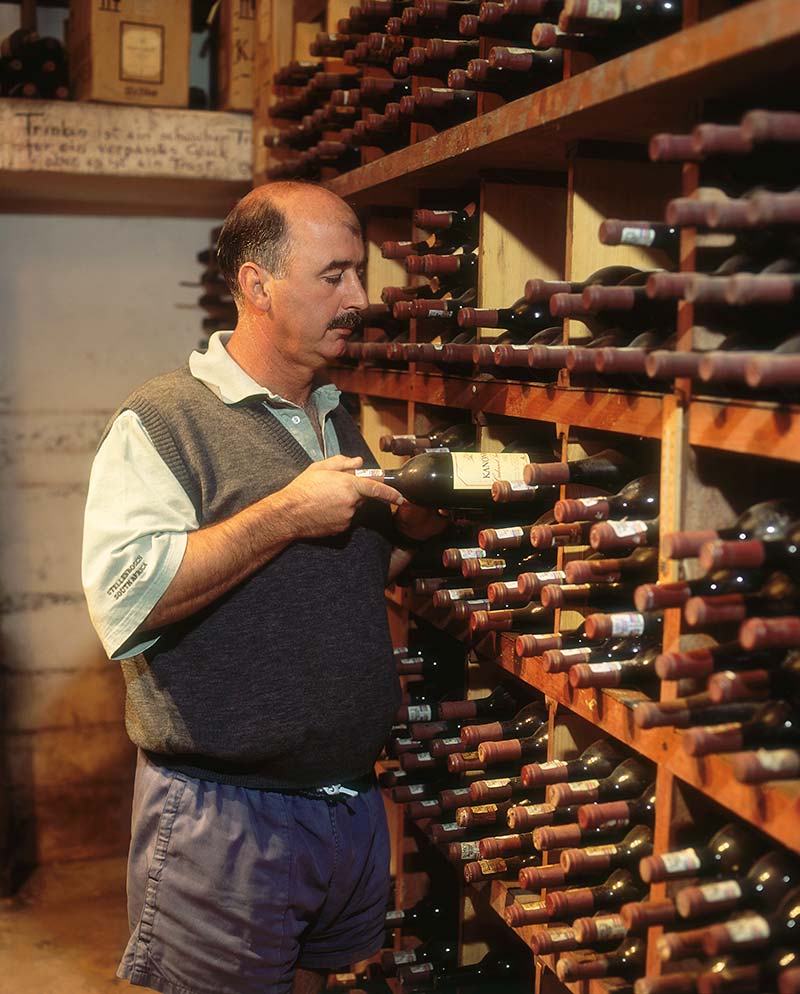 Beyers revisiting some of the great vintages he oversaw at Kanonkop
Beyers attained a status that no other winemaker anywhere in the world can lay claim to: the Prince of Pinotage.

In 1924, the legendary Abraham Izak Perold, professor of Viticulture at the University of Stellenbosch, had crossed the French grape varieties of Pinot Noir and Hermitage (today more often referred to as Cinsault).

Since Kanonkop’s first estate vintage in 1973, Pinotage has been one of its focal points, and no serious conversation about Pinotage anywhere excludes the name Kanonkop.

This is primarily the result of Beyers’s infatuation with the grape and its wines, as well as his crusade to have the variety recognised as a premium South African wine, capable of standing alongside other great red wines of the world. 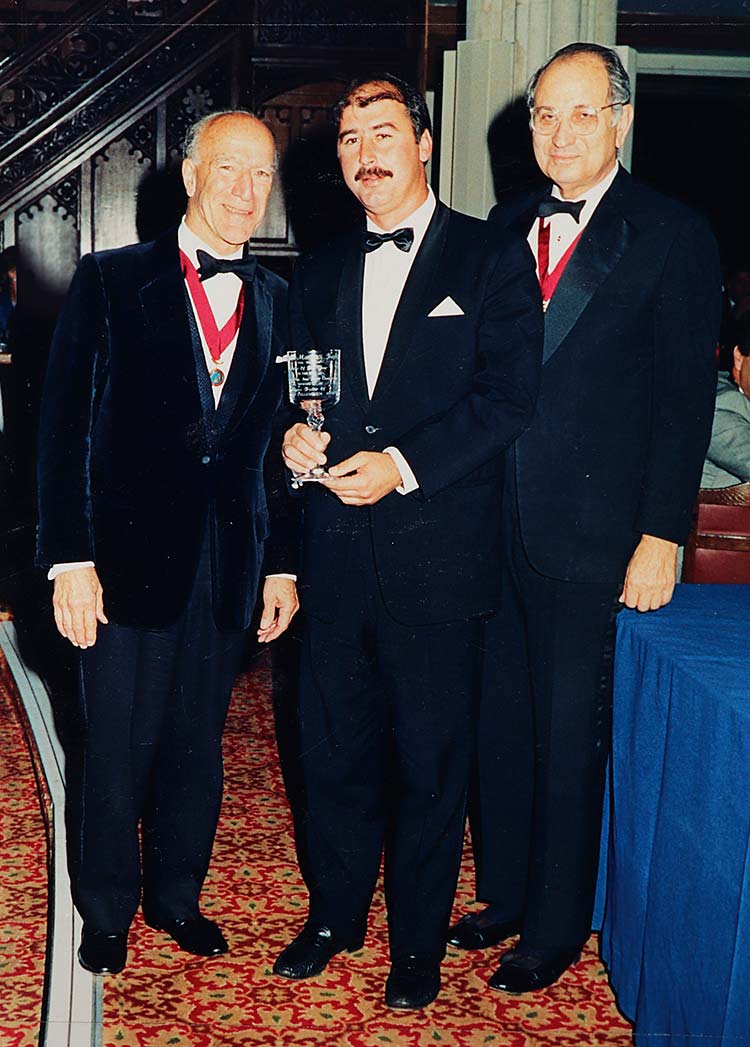 When he won the Robert Mondavi Trophy at the International Wine and Spirit Competition in 1991 for Best Winemaker in the World, it was the 1989 Kanonkop Pinotage that convinced the judges Beyers was that year’s man of the moment.

It was a great moment for Pinotage and the farm, and the country’s wine reputation in general.

Where Jan Coetzee had attracted attention to Kanonkop through his status as a South African rugby player who made brilliant wines, Beyers Truter now put the spotlight onto the farm with international recognition from the world’s leading wine critics.

It was also under Beyers’s watch that Kanonkop’s iconic wine, the Paul Sauer Bordeaux-style blend, was introduced, a wine generally regarded as South Africa’s finest red wine. The first vintage was 1981, and naming the wine Paul Sauer after the farm’s patriarch was a given, as was the fact that the red blend would largely rely on Cabernet Sauvignon, with components of Merlot and Cabernet Franc.

Paul, Beyers and Johann in the early 1990s, when Kanonkop was beginning to receive acclaim from abroad
Back to Our Story
Next → Abrie Beeslaar