You are here: Our Story > Paul Sauer

Paul Oliver Sauer made his mark in various ways, perhaps most famously as a politician who served in the South African parliament for forty-one consecutive years (1929–1970). Sixteen of those years were spent as minister for the portfolios of Railways, Land and Irrigation, Public Works and Forestry.

Paul Sauer grew up on a wine farm. He was five years old when his father, JW Sauer, an eminent politician and government minister, bought the splendid Uitkyk farm in 1903, which is still, today, just up the road from Kanonkop.

He spent his formative years here with his parents, JW and Mary, and two older sisters, Dorothy and Magda.

On Uitkyk, he was exposed to the influences on which the foundations of that future great personality would be built. Among the fruit trees and the vines growing on the slopes of Simonsberg, Paul soon developed a love for the land and for farming.

His appreciation of wine and its culture was profoundly influenced by his mother.

Mary was the daughter of Hendrik Cloete, the owner of Groot Constantia, South Africa’s oldest wine farm. This vinous legacy ensured that Mary, as well as her husband and children, embraced the culture of fine wine in their daily lives. 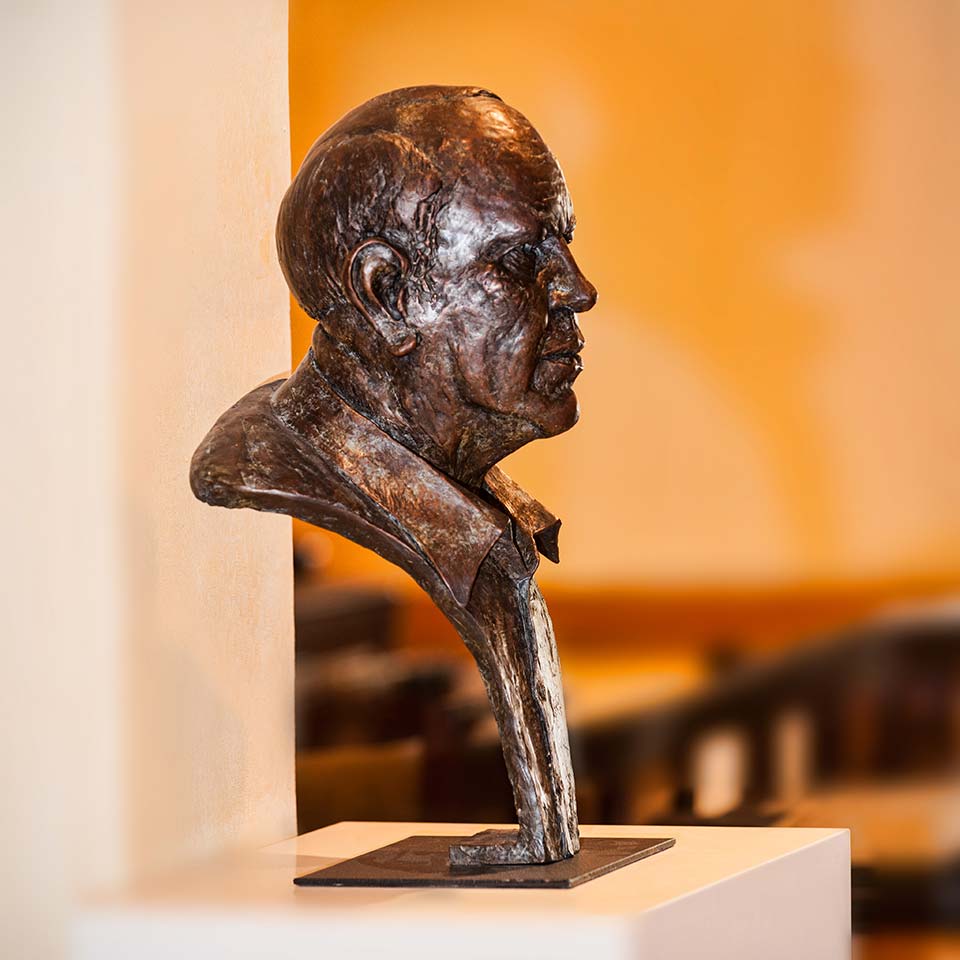 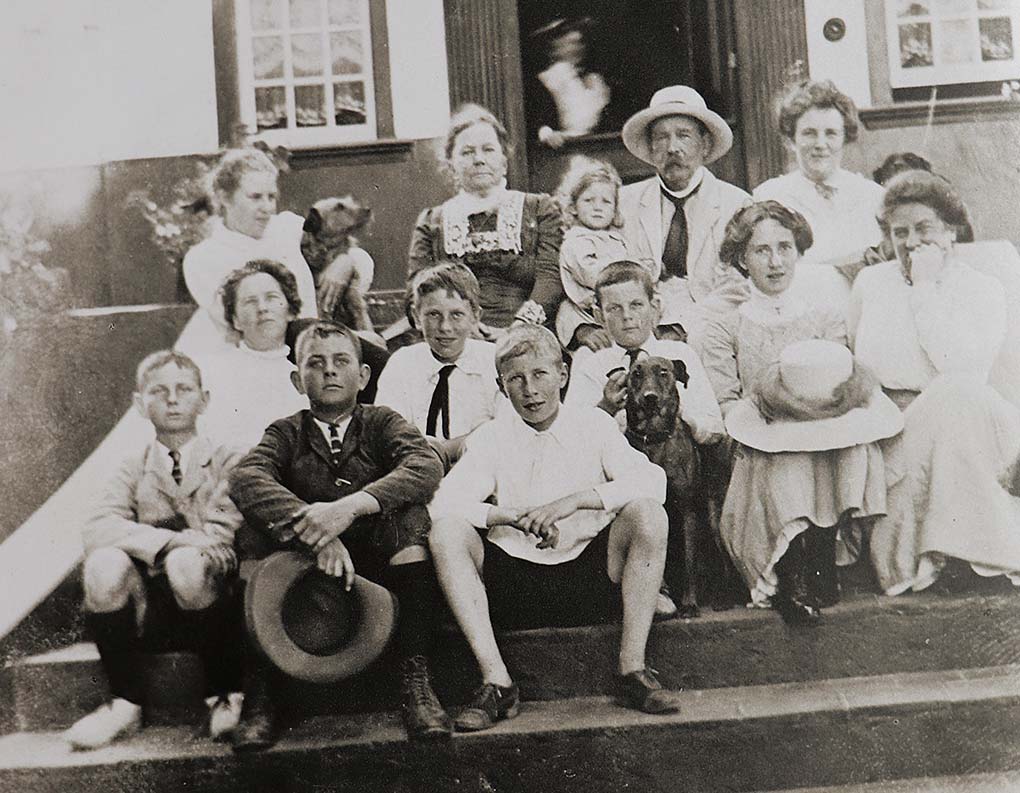 “Since Roman times the wine farmer was recognised as a cultured man of the soil. The other farmers were cattle herders and ploughmen, but the wine farmer … now he was the one that moved among the poets and the philosophers. Let’s face it, which poet ever sang the praises of the potato? Show me the philosopher that extolled the virtues of the humble cabbage?”

Paul Sauer was just 15 when his father died on 24 July 1913 at the age of 63. His mother Mary continued living on Uitkyk, her only son mostly away as a boarder at South African College Schools (SACS) in Cape Town. After a brief sojourn at the University of Cape Town, Paul set his sights on becoming a farmer and was among the first students to be enrolled at the Elsenburg Agricultural College in Stellenbosch in 1918. Today, Elsenburg is situated across the road from Kanonkop. Paul began farming with fruit and wine grapes on Uitkyk in 1921.
The Sauer era at Uitkyk ended in 1929 when Mary decided to sell the farm to a German nobleman, Baron Hans von Carlowitz. In a decision without which the South African wine industry would not have had Kanonkop, Mary’s transaction with Von Carlowitz stipulated that the lower part of Uitkyk (about 85 hectares of virgin land with no buildings or agriculture), would be left out of the transaction. It was to become the property of her only son, Paul Sauer, in the same year that he was elected for Parliament, thereby making him the first owner of the farm known today as Kanonkop Estate. 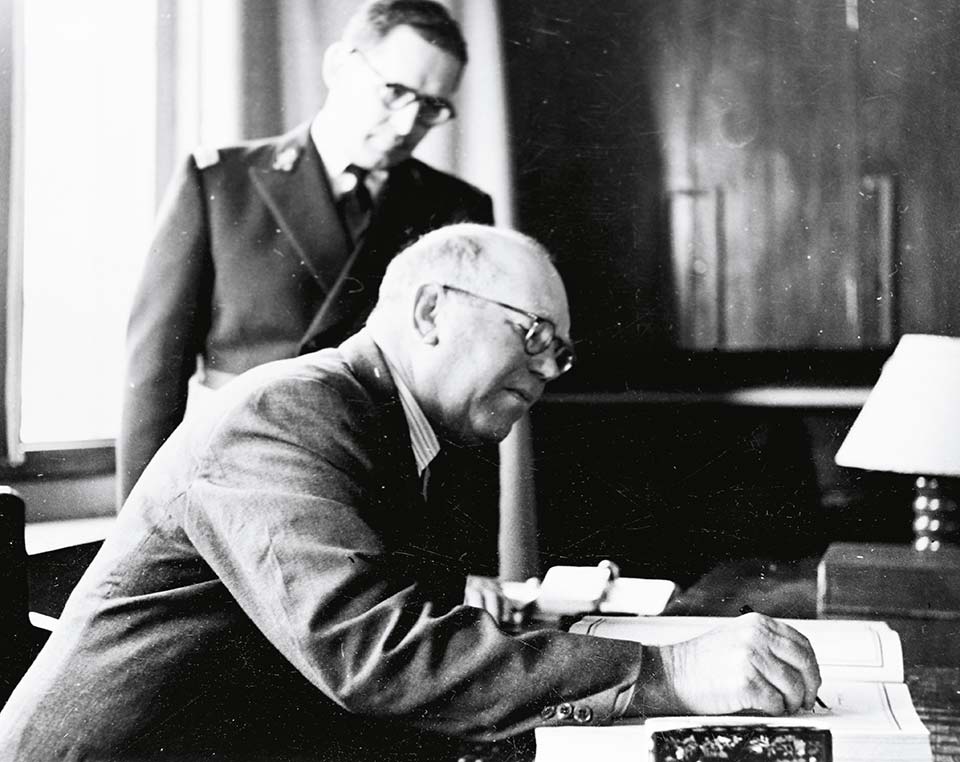 Paul Sauer was elected to Parliament in the same year that he became owner of Kanonkop. Throughout his life he would straddle the two worlds he loved: politics and farming.

Paul bought two large wooden shipping containers that had transported Baron von Carlowitz’s goods to his new farm home on Uitkyk, and brought them down to his empty farm.

Initially, fruit trees were planted to generate a quick cash flow, but both Sauer and Rossouw had their minds set on vineyards and winemaking.

With the declaration of World War II and the demise of the fruit export market, the land was cleared and vines were planted.

A cellar built in 1942 remains the basis of the winery today. Grapes are still fermented in the same open concrete tanks that were used for the original vintages.

By the 1960s, Kanonkop had substantially expanded its area under vines and harvested 1 400 tons of grapes annually from some 110 hectares.

Every grape vinified in the Kanonkop cellar was sold to Stellenbosch Farmers Winery (SFW), one of the large co-operatives, where it made its way into one of their classic Cape brands like Oude Libertas and Lanzerac. 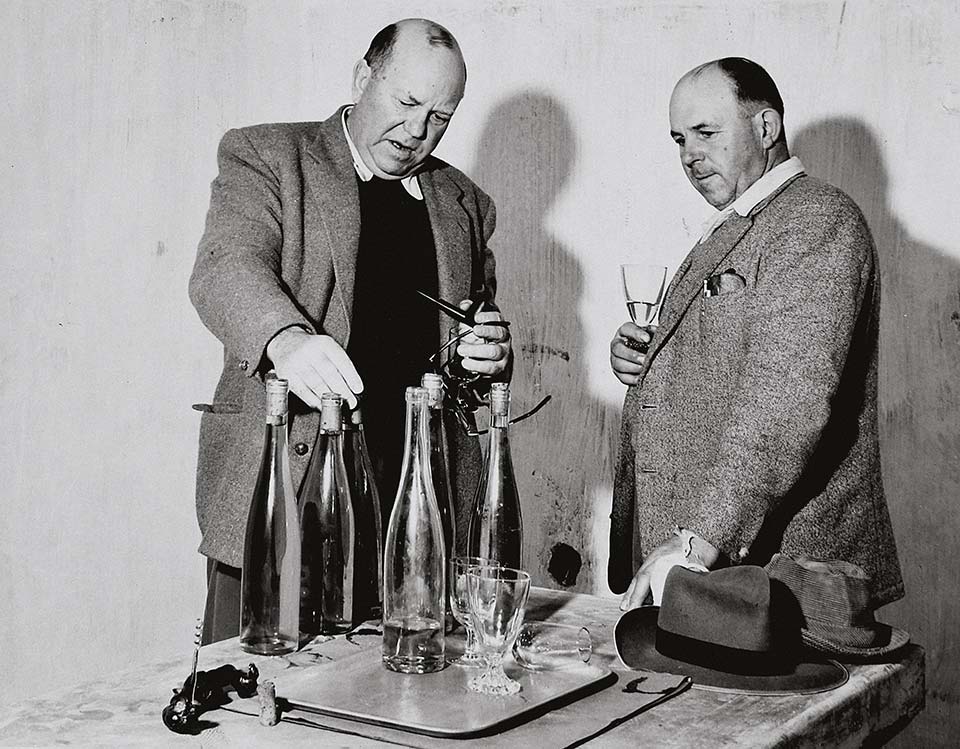 “Don’t be intimidated by the pretentiousness of those who purport to be wine connoisseurs. Please, do not allow them to get in your way and don’t allow the snobs to terrorise you. Don’t become obsessed with the ‘right’ wine. Decide for yourself what a good wine tastes like. For you, the best wine is the wine that tastes the best, and to hell with the rest.” 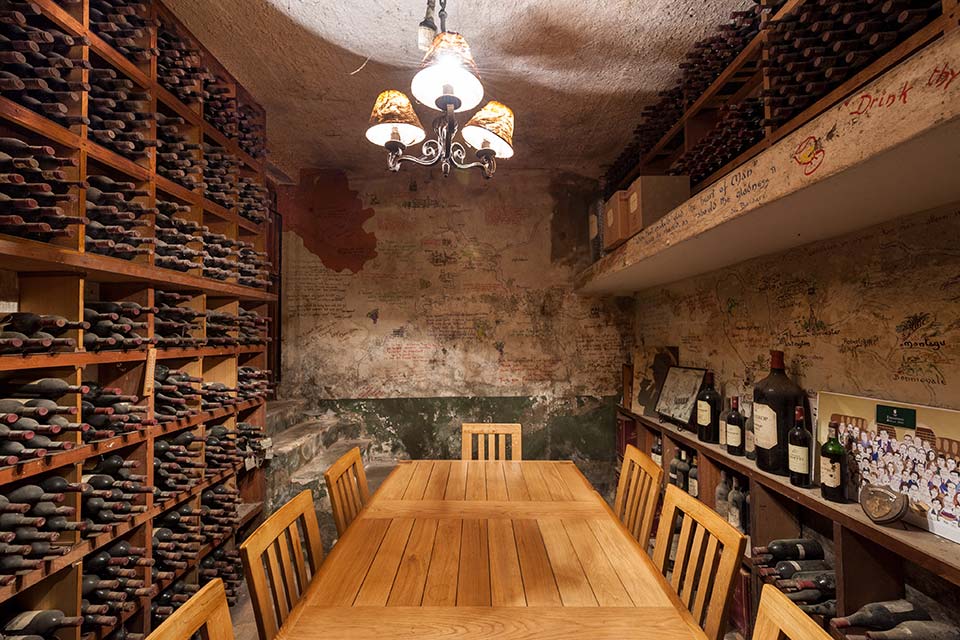 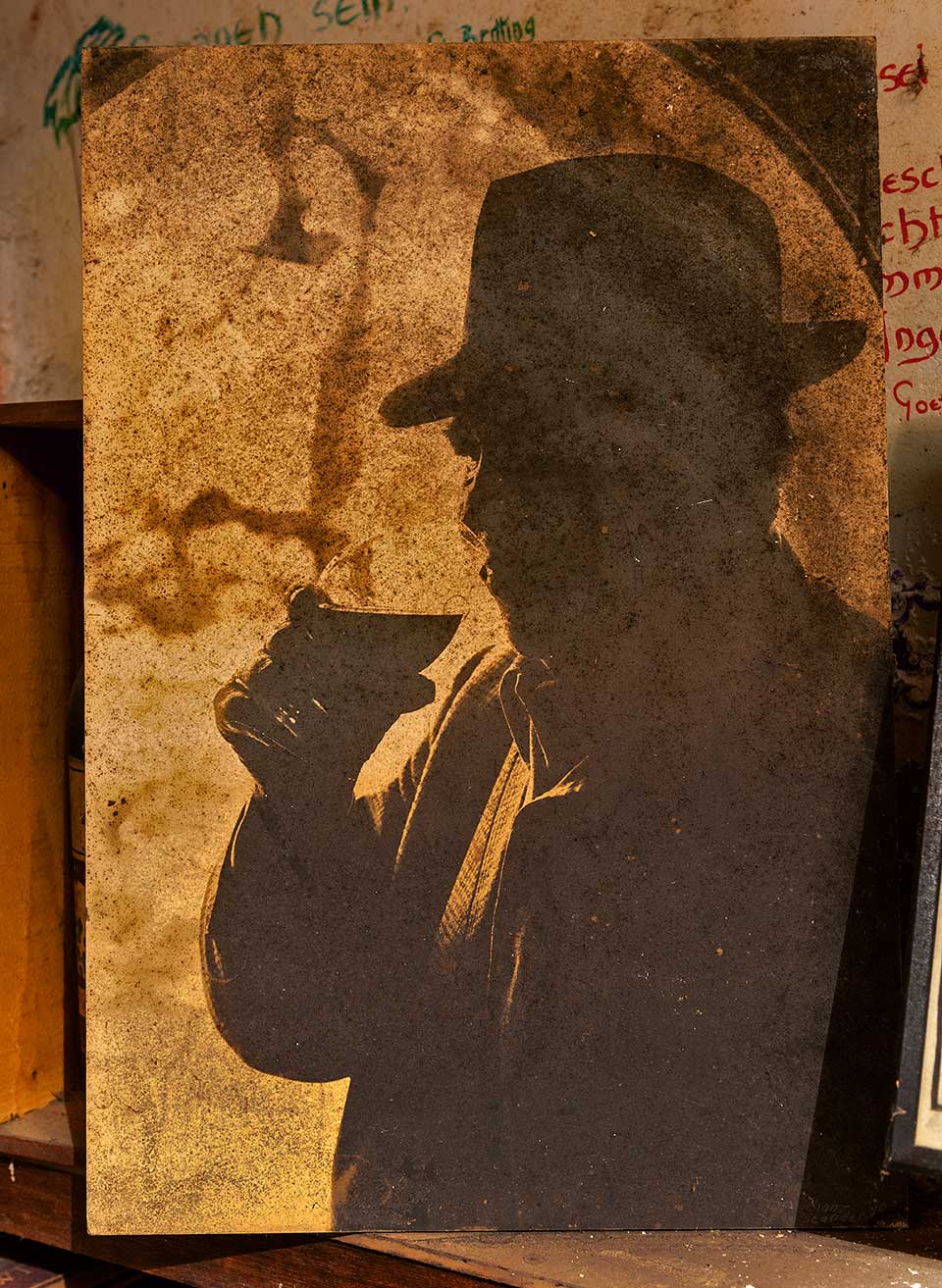 The pater familias of Kanonkop was known for his appreciation of wine. The one thing he wasn’t, though, was a wine snob. His favoured wine was Tassenberg, an everyday red much enjoyed by students of Stellenbosch University

Back to Our Story
Next → Jan “Boland” Coetzee
We use cookies on our website to give you the most relevant experience by remembering your preferences and repeat visits. By clicking “Accept All”, you consent to the use of ALL the cookies. However, you may visit "Cookie Settings" to provide a controlled consent.
Cookie SettingsAccept All
Manage consent